Over the past couple of years, I’ve been quite accustomed to my ISP providing me with an IP block (typically a /29) instead of just a single static IP, but recently I’ve switched to Hyperoptic for their FTTP offering (Because, Gigabit!). Unfortunately, they seem to only offer single IPs for residential service and require you to be on their business package which costs £££ if you want more IPs.

To get around this I decided to try to tunnel some IPs home – My setup is rather complex but I’m going to skip over the specifics for most of it and focus on the issue I was facing – lets ignore how the IPs route around the rest of my network and ultimately end up at the router for now and just look at the rather simplified view below. 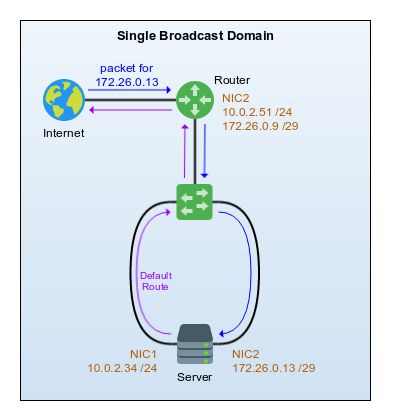 The image shows that I essentially have a router which has two NICs, one connected to the public internet, and one connected to a switch within my network. The second NIC has two IPs assigned to it as follows:

Traffic would come into Router from an upstream device with a destination of 172.26.0.13. As the router has a route to a subnet in which that IP resides (by virtue of it having an IP in that subnet), it knows that IP should be reachable directly via our NIC2 interface and so ARPs for 172.26.0.13 out of it. Because both interfaces on Server and NIC2 on Router all sit in the same broadcast domain, my server happily replies to the ARP request (out of both interfaces – more on this later) so the router now forwards traffic down the wire to my server; Except there’s no reply… but only sometimes.

After much head scratching, I noticed that when I do sometimes get a correct response from 172.26.0.13, the ARP table for Router was showing the MAC address for NIC1 on Server. When I don’t get a reply (usually after the ARP entry expires) it instead shows the MAC for NIC2 – But having the MAC for NIC2 is what I’d expect, so whats going on?

After spending a good amount of time throwing arbitrary queries into Google and cussing to myself, I eventually caved and asked my Network Engineer for a flat-mate, Dataforce, for a fresh set of eyes.

We both spent a little while talking through the setup and testing various things and after a while took a look at a sysctl setting for rp_filter (Reverse Path Filter). Consulting kernel documentation at https://www.kernel.org/doc/Documentation/networking/ip-sysctl.txt, it says the following for rp_filter:

If I check the current value for Server, it is indeed STRICT (1)

This implies that when a packet is received on an interface, the source IP is checked against the local routing table to see if the route in which the server would normally talk to the source IP, is the same interface at which the packet was received. My server’s default route (0.0.0.0) is out via NIC1, so traffic that ultimately comes from the internet via my tunnelled subnet would arrive on NIC2, but rp_filter would match against NIC1 – thus the check fails and the packet is dropped as invalid.

Based on the documentation above, I either want to set rp_filter to be either 0 (NONE) or 2 (LOOSE). This is done via sysctl and the value can be changed whilst live in one of two ways:

Using either of these methods will only change the value until the server is rebooted. The value reverts to whatever is defined in sysctl.conf on boot so to make this change permanent, either edit your config, or add the following line if its not already defined:

Changing this to LOOSE (2) means that when a packet is received on an interface, rp_filter will check the route table to see if the source IP is reachable via any interface and if so, accept it (because it matches against 0.0.0.0). If I were to set this to NONE (0), it outright wouldn’t do any verification checks so would just work normally regardless – the choice as to which you use is up to you.

Now, if you recall I mentioned earlier that without this change, it sometimes worked and sometimes didn’t. This is a whole different issue altogether!

When Router sends an ARP request, its a broadcast, so Server will see it on both NIC1 and NIC2 as they are both within the same broadcast domain. By default Server will respond to the ARP request out of both interfaces because it has the requested IP on one of its local interfaces. So, sometimes when Router ARPs for 172.26.0.13, the reply that leaves NIC1 on Server arrives back at Router first, so Router sends packets to NIC1.

Using the scenario above with rp_filter set STRICT, packets arrive into NIC1 and the source would be reachable via NIC1 so everything just kinda works. However when ARP replies from NIC2 arrive back at Router first, we are back to Server dropping packets as invalid because of rp_filter being STRICT.

Now that we understand rp_filter a bit better and have changed it to LOOSE, we should probably make sure that Server only responds to ARP on the interface with the IP being requested. Whilst everything seemingly just works without doing this, we should make sure the flow of traffic is predictable and not randomly switching between interfaces based on which ARP reply arrives back first; so lets take a look back at the kernel documentation linked above and focus on arp_ignore

So as above, lets set the value that best suits to what we need and make it persistent, in this case I chose 2

We’ve now ensured that ARP replies are sent out of only the interface which has the IP being requested. Reverse Path Filter will no longer drop packets based on which interface the source is reachable and I can now talk to my server via my tunnelled IPs and everyone’s happy! 🙂