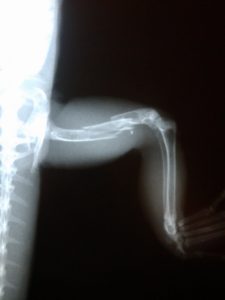 When I eventually arrived home after having a relaxing 1.5 hour bus journey from Milton Keynes Central to Birmingham International, my pet Iguana did her usual routine of coming over to me to say hello which, in her world means she wants me to make a fuss of her and usually give her some food. After I had spent 5 or so minutes rubbing some dead skin off her back and prepairing some cress for her to munch on, I sat at my computer and proceeded to catch up on some of the TV shows I had missed over the weekend. After a short while I noticed Iggy was climbing down onto the floor (Which isnt unusual, she likes a good wander), as she walked around the side of the desk I saw her leg was the size of a rugby ball…

As this was a Sunday Evening, taking her to our local vet was out of the question. They charge £90 to look at anything out of hours, which doesn’t include the cost of any extras involved such as X-rays. I was stuck as this would also apply for the Monday which was a bank holiday. Some of you may wonder why I didn’t take her and spend the £90. Quite frankly, I cant afford it. My Iguana was moving around fine, she was keeping her weight off her leg so I decided I would do what I could to restrict her movement and to take her to the vet during normal working hours.

I managed to get an appointment for earlier today at a vet that deals with reptiles, Rose Cottage in Runcorn. After an examination and being advised what the issue was, I obtained the X-ray image above. As you can see the break is a relatively nasty one and is broken into three pieces. I am a bit disappointed that it wasn’t something less serious, as god only knows what will happen if the break doesn’t start to heal properly in the next 4 weeks.

Once I have taken her back to the vet to have it looked at again I will post another update, just in case anyone is interested!